It has no part that is a lie or false.
A witness of Truth is a person who declares with hand on the Bible, to tell the Truth and nothing but the Truth.
This is a true witness.
What then of preachers who bring a bible to the pulpit and then preach lies, perverting the witness of what the scriptures really mean?
Why are people sitting in God's courtroom of judgment (1Peter 4:17), allowing lies in their ears?
A preacher who replaces Truth with lies is certainly going to hell.
The question is: will you go to hell also believing the lies and calling them the truth?
Christmas, lie.
St. Nicholas Santa Claus, lie.
Christmas tree, lie.
Jesus born December 25th, lie.
Merry catholic Christmas, lie.
Flying reindeer and snow sleigh, lie.
North Pole toy factory, lie.
Santa has "all seeing" eye, lie.
Santa loves to drink beer and eat sausage snack before continuing to deliver gifts to children, lie.
Santa is a born again Christian, lie.
Where are the true witnesses?
Almost all UPCI pastors say none of the lies are salvational.
It's how they avoid being a true Truth witness.
What is so shocking are the members who love the "not salvational" lie.
Why?
Because they love the lies. They will fight for the lies and the pastor who tells them they are not salvational. They do not want deliverance. They will fight you and say bad things about you.
But for the pure in heart who believe that Truth honors Christ, they will come out from among and be separate and touch not the unclean thing (2Corinthians 6:17).
Everything about Christmas is unclean. We are not to touch anything associated with it. That is a commandment of the Lord.
A true witness will not bear false witness.
Be ye holy as I Am holy said the Lord.
There is no way the Lord will welcome Santa Claus into heaven.
No way he will allow a decorated Christmas tree.
If you are a true heart, you will thank me for writing this article on Truth.
Bishop Reckart
A man of the holy nation
Posted by Son of The Blood at 3:18 PM No comments:

MORE ABOUT THE TETRAGRAMMATON - JEHOVAH AND YAHWEH NAMES

Over the years a lot of new information is discovered that makes it necessary to correct old errors, errors that came from tetragrammaton cult writers and scholars. We now know that according to Josephus, the four letters the High Priest bore was IAUA (4-vowels) and not YHUH (4-consonants).
Many people do not know how the names Jehovah (1280AD) and Yahweh (1567AD) were invented by catholic monks.
Because of this many are recanting the name of Jesus and casting it down to hell as the name of satan. They are rebaptizing people in all kinds of new guess names.
Stick with the name of Jesus. It is the name above all names. And it is the Hebrew pronunciation of the holy name of God that came down from heaven in the unknown tongue.
SPECIAL NOTE ABOUT YAHWEH AND ITS ORIGIN
Yahweh is not a Hebrew name. It does not come from the Paleo-Hebrew language. On its face it is a Latin name invented from Iabe the name of God in the Samaritan bible.
It was Gilbertus Gennebradus (1567AD) who invented Yahwe from Iabe. His steps were Iabe to Yave to Yahve and Yahve to Yahwe and then others hung the final "h" forming Yahweh.
It was Wilhelm Gesenius the German linguist (176-1842), who suggested that Iabe, Yave, Yahwe, came from YHVH the tetragrammaton.
From that time, the tetragrammaton was slowly changed from YHVH to YHWH. The change had not fully taken root by the time of James Strong (1882-1894) who compiled his concordance on Chaldean and Greek words (1880-1889 and published 1890). Mr. Strong claims in his Hebrew #3068 that Jehovah was the pronunciation of YHVH. Notice he used the "v" letter. The name Yahweh does not appear in any of his concordance.
Please note also:
Jehovah is three syllables Je-ho-vah.
Yahweh is two syllables Yah-weh.
In Jehovah originally "J' was the letter "I" Iehovah.
In Yahweh originally "Y" was the letter "I" Iebe, Yave, Yahwe.
Jehovah was an attempt by Martini to vocalize the consonants YHVH. It was done by adding the vowels of Adonai.
Yahweh was vocalized by playing alphabet duck, duck, goose.
Today, there is a quick stampede from Jehovah over to Yahweh. Departing from one Latin invented name to another Latin invented name.

The evil and sin of all of this is to claim the name of Jesus means Jehovah or Yahweh has come in the flesh.
This false doctrine can be asserted. It can be fabricated using word magic. It can succeed by those ignorant of the history of these guess names. At risk here is that the name of Jesus is being sacrifice. It is being cast down as the name of satan. Call Jesus the "pig god" name or the "horse god name." Blasphemy after blasphemy is screamed against the name of Jesus.
Who will declare his generation?
Who will remain to declare his name above all names?
Who will come out of the UPCI and other Oneness groups who teach the lies Jesus name means Jehovah or Yahweh saves?
I am begging all honest men, all honest women, to come out of the dark and stand in the Light and cry from the rooftops that Jehovah and Yahweh will not win against the name of Jesus Christ.
Bishop Reckart
A hero of the name of Jesus
Posted by Son of The Blood at 3:08 PM No comments:

DID CHRISTIANS BORROW THE CROSS FROM PAGANISM 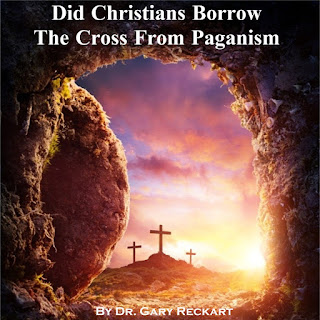 There will not be another booklet written that contains the information and analysis about the Cross.
If after seven days you do not agree, your donation money back.
You can receive your printed copy for a donation to Angel House children's home.
_____________________________
Ok, this booklet will not be given to you free. I get it. If you can't get it free you do not want it. I am so sorry I ask for a donation to help little homeless children. But, I decided if the Truth has any value to you, you will gladly give. I have given already a massive amount of information to you. More than any person in the world. If you want to know the Truth about the Cross, you will not get it from anyone else.
You can send your children donation to:
Pastor Gary Reckart
4401 Cooper Road
Plant City, Florida 33565
Posted by Son of The Blood at 10:57 AM No comments: